Wir sind für Euch da! Direkt zur Online-Sprechstunde per Chat (Deutsch)   /   We are there for you! Directly to our online consultation via chat (English)
Home » Campus Child Care

Welcome to the Campus Child Care! 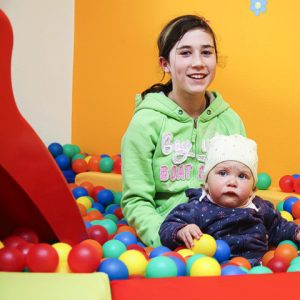 Since April 2010, the Studentenwerk Magdeburg has been operating the Campus Child Care in the student hall No. 7 on the campus of the Otto von Guericke University of Magdeburg. Since its opening, the free, flexible childcare service on campus has been so well received especially by the students with children that in June 2012 we opened a second facility on the campus of the Medical Faculty. Both facilities provide services of trained childminders and nursery teachers on an hourly basis.

In September 2012, after extensive renovations opens our new day care centre for children “CampusKids” on the ground floor of the student hall No. 7 on the campus of the Otto von Guericke University of Magdeburg.